Udaipur is known as the Venice of the east. It is also called the city of lakes. The Lake Palace on Jag Niwas Island in the middle of Pichola Lakes is the finest example of its architectural and cultural explosion. The grand City Palace on the banks of the lake compliments the palace along with the Monsoon Palace (Sajjan Garh) on the hill above. Udaipur is also the centre for performing arts, craft and its famed miniature paintings.The Shilp Gram festival is a center of attraction during the season. 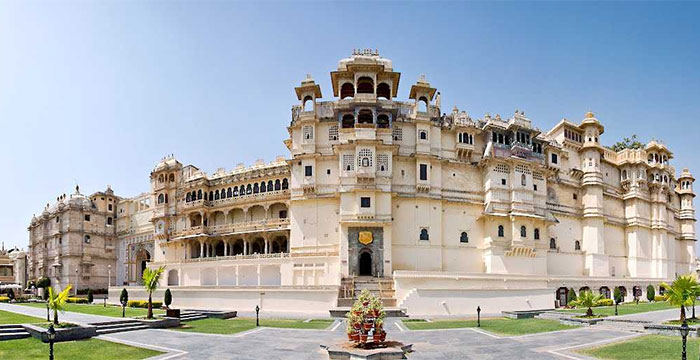 The largest palace complex of Rajasthan stands majestically on a hill surrounded by crenellated walls. Started by Udai Singh, this enormous edifice of 30.4 meters in height and 244 meters in length was subsequently built upon by later rulers. The entrance to this palace was through 'Hathipol', the 'Elephant Gate' & along the main street of the old city. The 'Barapol' or the 'Great Gate' brings you to the first court which leads to the three-arched Tripolia Gate. It marks the spot where the rulers were weighed against gold or silver, the equivalent value of which was distributed to the poor. The way now leads to a series of courtyards overlapping the pavilion terraces, corridors and hanging gardens. There is a 'Suraj Gokhada', 'Balcony of the Sun', where the Suravanshi (sons of the Sun God) Maharanas of Mewar presented themselves in times to trouble to the people so as to boost their morale. The 'Mor Chowk' or 'Peacock Courtyard' gets its name from the vivid mosaics in glass which decorate its walls. The Chini Chitrasala is noteworthy for it's blue and white ceramics, while a series of wall paintings of Krishna can be seen in Bhim Vilas Palace. There are various other (sub) palaces - Dil Kush Mahal, Moti Mahal, Sheesh Mahal and Krishna Mahal. 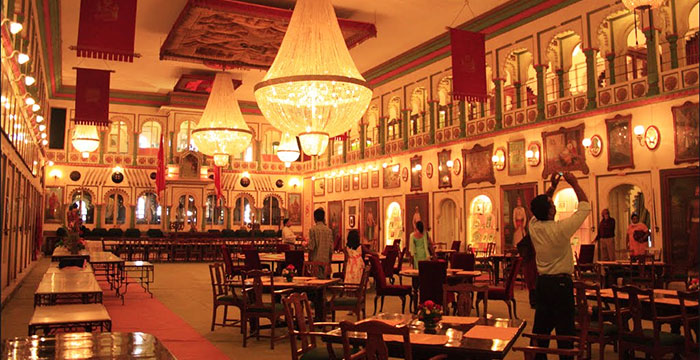 The Crystal Gallery located in Fateh Prakash Palace (part of the City Palace Complex) was opened to the public in 1994. Overlooking the Durball Hall, the gallery has a wealth of rare items. Inspired by the glittering showroom of the Birmingham based company. F & C Osler in Calcutta, this incredible collection was ordered by Maharana Sajjan Singhji in the year 1877.

From table lamps to washing bowls, perfumes bottles to paperweights and a number of humble writing instruments, this amazing collection has it all. Particularly noteworthy is a crystal bed; the only one of its kind in the world. Besides these, other fascinating objects include a sofa set, a dining table, fountains, various coloured crystal objects, mirrored tabletops, exquisite decanters and a dazzling jewel-encrusted carpet. 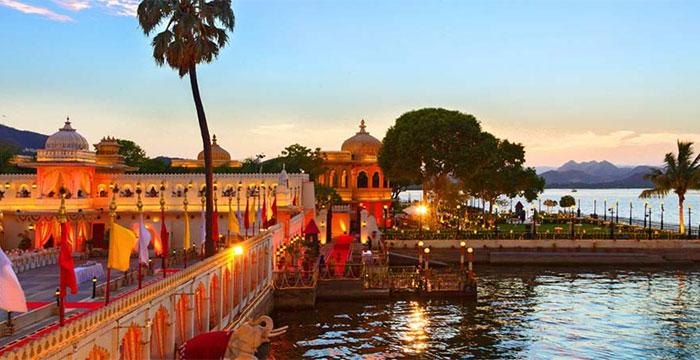 Maharana Karan Singh founded this island palace on lake Pichola, Jag Mandir, but later on Maharana Jagat Singh added to it; and it is from him that the island derived its name. Prince Khurram, who became Mughal emperor Shah Jahan, took refuge here and it is said that he gained inspiration for the style of the Taj Mahal from this palace. Over the last few years the buildings, gardens and other features on the island have been meticulously restored, and the island is now highly popular as a premier venue for functions. 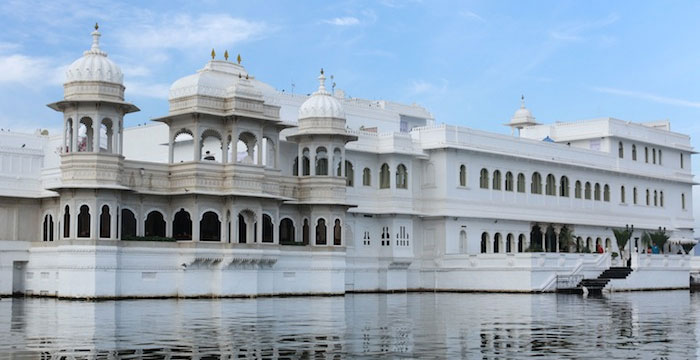 Lake Palace is regarded as one of the most beautiful palaces in the world. The sight of this white wonder rising from the waters of Lake Pichola is truly mesmerizing.

Situated on the island of Jag Niwas, it was previously known as the Jag Mahal after the founder, Maharana Jagat Singh II. Built in 1754, it is a marvel in stone and a wonderful example of Mughal-Rajput architecture. Successive rulers used the cool haven as a summer resort. In the late 1950s, it was converted into a luxury hotel, and is now under the Taj Group. The suites of the hotel are beautifully designed; each having a particular theme & decorated with textiles and handicrafts of the region. The royal banquet rooms are now reception rooms, bars and restaurants. Apartments named the Bada Mahal, Khush Mahal, Sajan Niwas, Phool Mahal and the Dhola Mahal add to the romantic setting, and give a taste of the regal splendour of a bygone era. 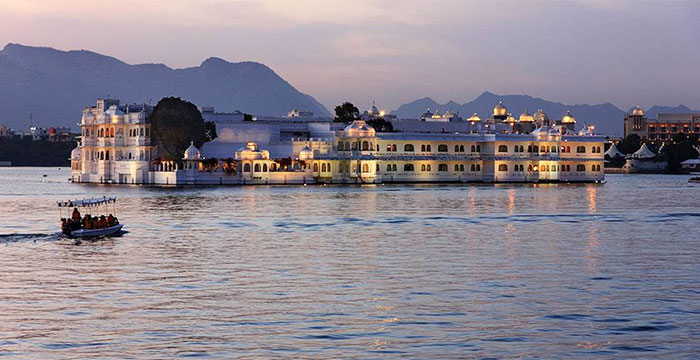 This scenic lake, surrounded by palaces, temples, ghats & hills, is the largest in Udaipur & derives its name from Picholi village, flooded long ago so as to enlarge the lake. Rising from the lake are the two island palaces of Jag Niwas and Jag Mandir. 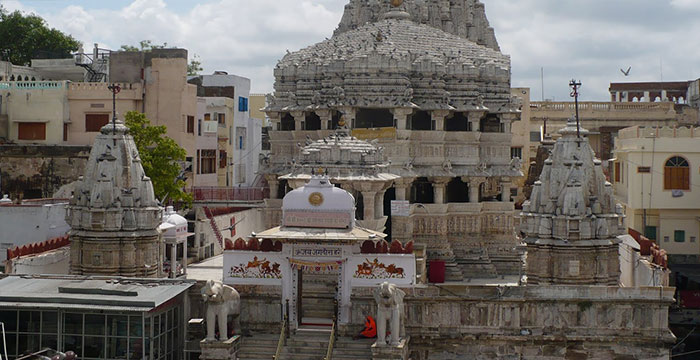 The Jagdish Temple stands on a bluff of rock high above the busy junction of Jagdish Chowk, near to the City Palace. Built by Maharana Jagat Singh I in 1651, the temple is dedicated to Lord Vishnu. The exterior and the plinth are covered with bas-relief of figures; alligators, elephants, horsemen and some celestial musicians rise in tiers. Chanting, bells and music can be heard throughout the day. The main 'arti' takes place at sunrise and sunset to the sound of the fast, repetitive crash of 'jhinja'; the flat metal discs that are beaten to ensure that the gods and the populace are aware that prayers are being offered. This is Udaipur's largest and most splendid Hindu temple. At the foot of the temple steps one can purchase devotional garlands with which to deck the idols. Visitors are welcome but modest attire is expected. 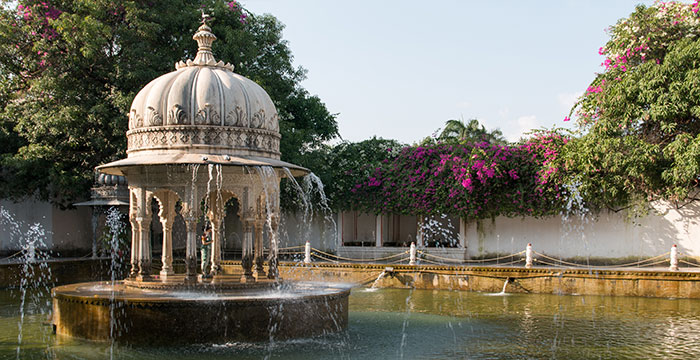 This lovely park, the 'Garden of the Maidens', appears discreet and in impeccable taste. There are four pools with dainty kiosks, and all around are flower beds, lawns, pools and fountains protected by a series of walls and shady trees. The fountains of the Sahelion-ki-Bari function solely by water pressure and nowhere are pumps used. 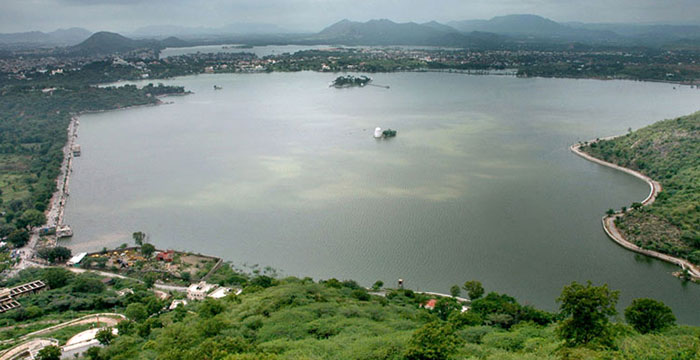 This lake was constructed by Maharana Jai Singh to the north of Lake Pichola, and linked up by the small lakes of Rang Sagar and Swaroop Sagar via a short canal. Fateh Sagar is surrounded by natural beauty, being bordered on three sides by wooded hills. It is named after Maharana Fateh Singhji, who had it dammed. Visitors can take a short trip across to exquisite Nehru Island Park, which, with its greenery and delicate pavilions, is the focal point in the lake. Udaipur's solar observatory stands on a smaller island in the lake.

An impressive bronze statue of Maharana Pratap on his horse stands atop Moti Magri (Pearl Mount) overlooking Fateh Sagar. Locals climb the hill to pay homage to Rana Pratap and his faithful charger Chetak, who was killed in the battle of Haldighati. There are various other' interesting monuments as well as the ruins of an ancient fort. Nearby are the charming Japanese rock gardens known as the Aravali Vatika. 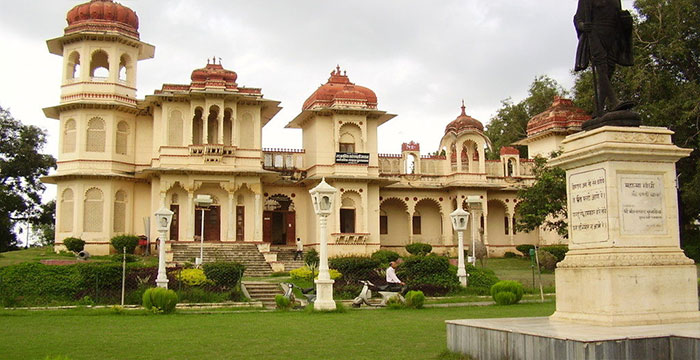 Sajjan Singhji founded this large park (locally known as 'Gulab Bagh') in 1881 for the benefit of townsfolk. There is much worth seeing here, including several step wells, and a small zoo and several species of tree. The Saraswati Bhawan (previously the Victoria Hall) is an elegant building erected to commemorate Queen Victoria's Diamond Jubilee. Now it serves as a library, and contains many rare books as well as a displaced statue of Victoria. 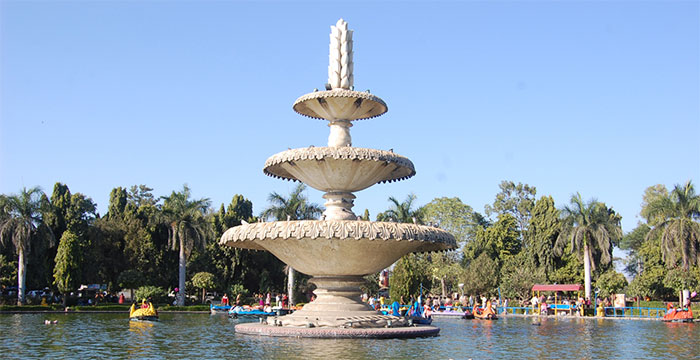 This huge, graceful, three-tlered: fountain was erected as a monument to Shree Mohan Lal Sukhadia, one-time Chief Minister of Rajasthan and a native of Udaipur. The fountain is surrounded by a, circular lake, bevound which are pleasant gardens. Locals flock here in their leisure time to boat on the lake in bizarre duck-shaped pedallos, or just to relax w refreshments at nearby cafes. 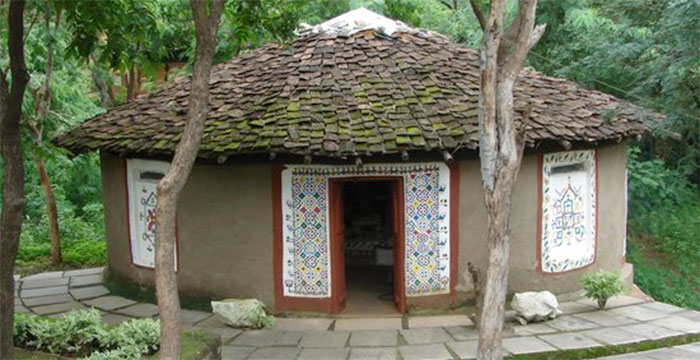 This museum, within the Tribal Research Institute, is Udaipur's best-kept secret. The display is amazingly imaginative, with life-like scenes recreated to put the artifacts into context. The institute also boasts a very well maintained, well stocked library. For those seeking information on Rajasthan's tribes, this is ace to come. Entry is free. 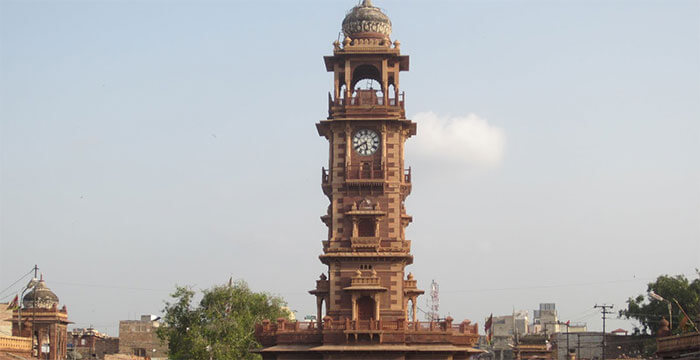 This is situated in the heart of the Old City and erected in 1876 on the orders of Fateh Singhji. There had been reports of grain hoarding by greedy merchants that caused a shortage & forced grain prices up an investigation resulted in those guilty being brought before the maharana, who, in his wisdom, decided that a suitable punishment would be a hefty fine; the revenue from which used to build the clock tower. It was the first clock in Udaipur & the actual mechanism in English; previously the community was alerted start & finish of each working day by canon from Ekllngarh Fort on Machla Magra at 10:00 & 18:00. The maze of narrow lanes in the of the clock tower have a magnetic appeal with fascinating little shops selling exotic Nearby, silver, gold and coppersmiths at their craft in the age-old ways. 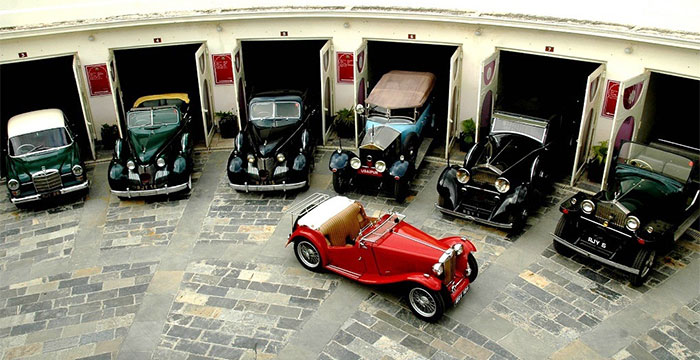 The collection within the grounds of the Garden Hotel comprises a variety of rate and fascinating vehicles; some stately, others sleek and fast, and a few that are frankly weird. Most were once used by Maharanas of Udaipur; however other vehicles of particular interest are gradually being added, as and when they can be acquired. 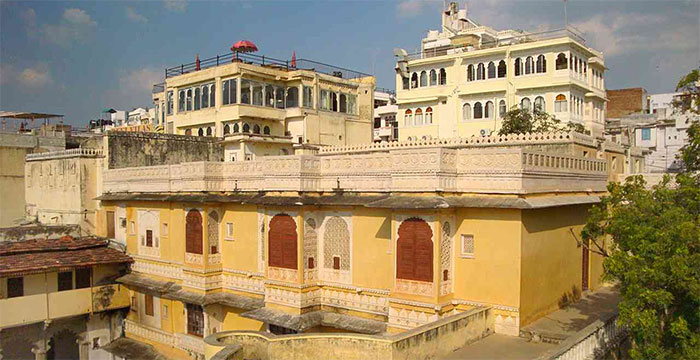 As far as Udaipur’s waterfront facades go, Gangaur ghat is one of the most elegant and noticeable, with its charming triple arched gateway leading onto a broad lakeside piazza. What is not so well known and therefore not so well visited,is that to the side of this gateway there is one of the finest havelis (noble houses)in the city, Bhagore ki Haveli. Shri Amarchand Badwa, Prime Minister of Mewar from 1751 to 1778 built this haveli. Later the edifice came under the domain of the mewarRoyal Family. In 1878, the father of Sajjan Singh, Maharaja Shakti Singhof Bangor extended the haveli and built the triple arched gateway. After independence it was taken over by the government but it was not maintained, and the haveli’s condition deteriorated deplorably. In 1986, it was handed over to the West Zone Cultural Center who began a process of faithful restoration and this beautiful building has been returned to its original pristine glory. 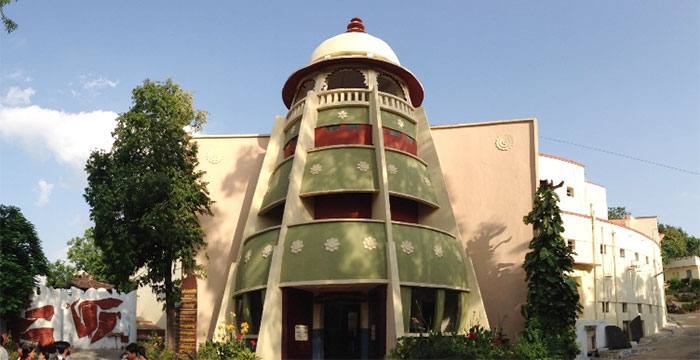 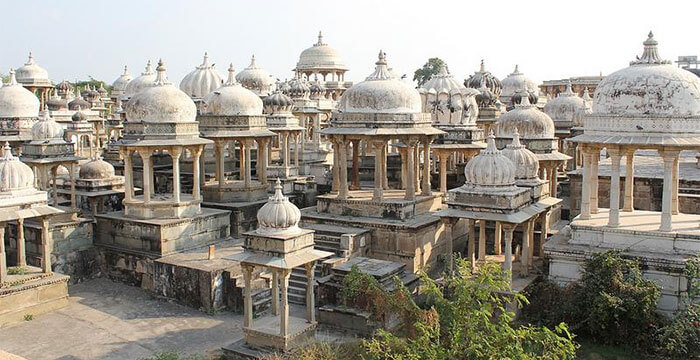 Crumbling ruins are all that is left of the ancient capital of the Sisodias, the founders of Mewar, though this is a significant archaeological site. The museum displays relics, some of which date back 5,000 years. Nearby, a vast enclosed plot is used for the cremation of royalty and Rajput nobility. There are over 250 cenotaphs built over a period of nearly 350 years; wondrous, newly renovated monuments that are well worth a visit. The nearby Jain Temple, resplendent with intricately carved marble is most impressive and should not be missed. 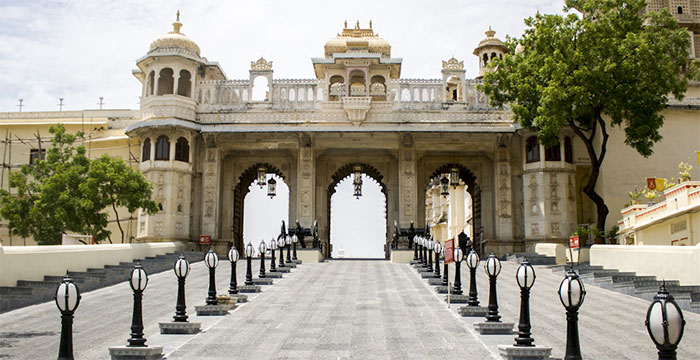 Udaipur's ancient ramparts are extensive through no longer complete. Large sections have gone to make way for roads and shops, but the nine main gates remain. These are Brahmpol (named after the god Brahma), Ambapol(dedicated to the goddess Amba), and Chandpol the Moon Gate) to the West, Hatipol (The - Elephant Gate) and Delhi Gate to the North, Surajpol (The Sun Gate) & Udiapol (named after Udai Singh) to the East. Finally there are Kishanpol (named after Lord Krishna), and jamrapol by Lake Pichola to the South. 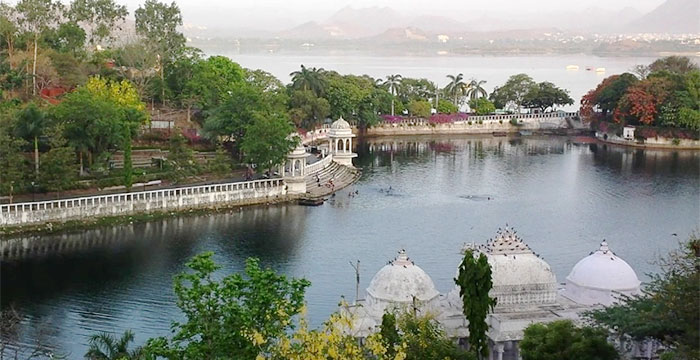 This is a beautiful section of Lake Pichola near Sunset Point to the side of Machala Magra hill. Nearby a beautiful, tranquil park with a musical fountain provides a romantic place from which to seethe sun setting over Lake Pichola. For those who enjoy a brisk climb and an even wider view, there is a path to the top of the mountain upon which stands an ancient fort. 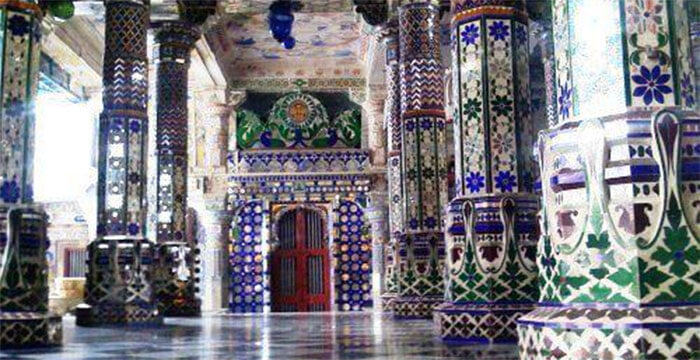 One of the oldest Jain temples in Udaipur, the Sheetal Nath is notable for its dazzling interior Décor of intricate mirror and glass mosaic work. Every surface sparkles with exquisite designs. Although near the Clock Tower, visitors usually miss it, as it is not on the average tourist trail. 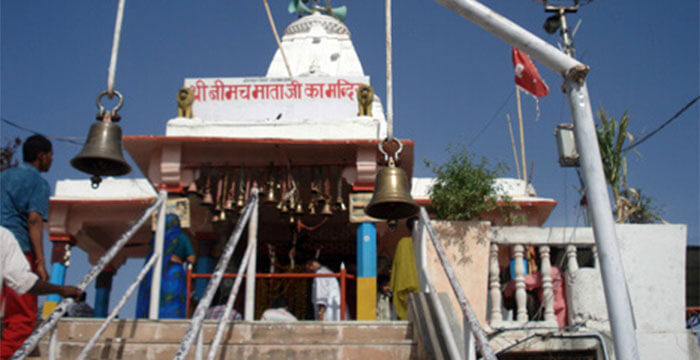 Dedicated to the goddess Nimach Mata Devi who embodies three entities in one; Shakti (the mighty), Saraswati (the wise) and Durga (the destroyer), it is perched on a hilltop above Fateh Sagar. Popular with locals who not only wish to maintain good relations with this mighty goddess but also feel the benefit of the exercise involved in climbing over 600 steps. The view a awesome, especially at sunrise or sunset.